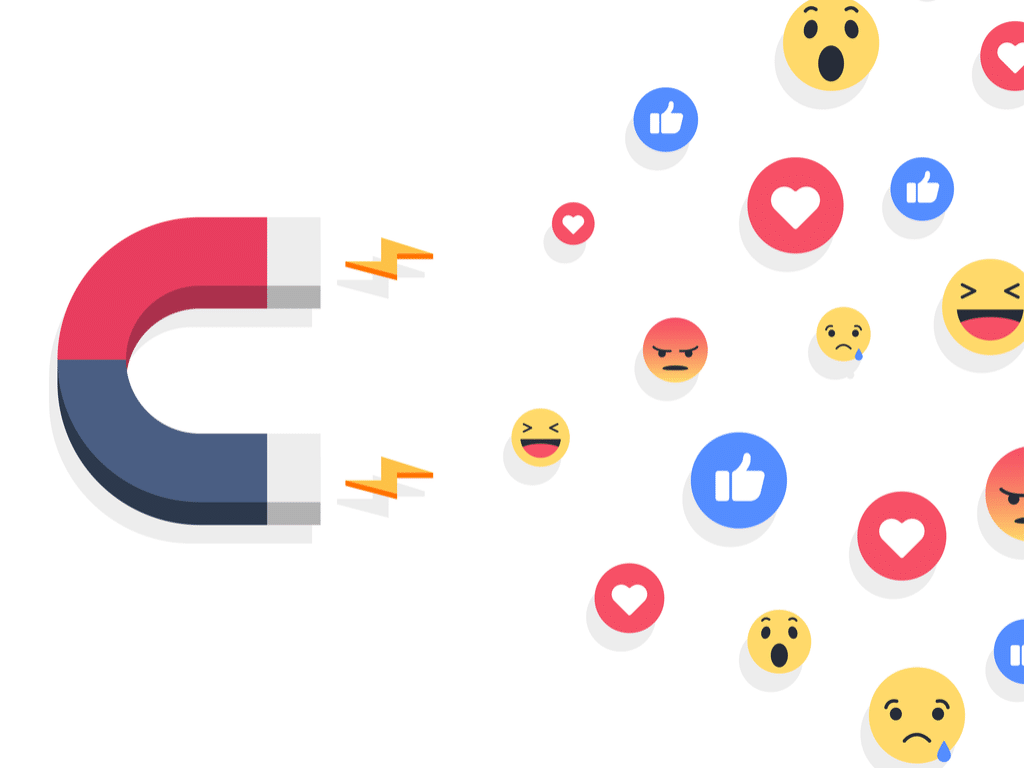 Facebook is the ultimate platform for engagement, with more than 1 billion people on the platform, it’s not a contest.

A lot of businesses we have spoken to have mentioned their lack of success on Facebook and we have asked them what they have done. The answer is almost always the same.

“We put out a graphic asking people to click on the link and purchase our product”. Every business has attempted something along these lines.

This doesn’t work. People aren’t robots who just buy when you share them a link. (Except Apple)

In today’s article, we cover a different strategy for Facebook engagement that has been used successfully by many businesses in Singapore.

Giveaways are when you give your product for free in return for an action from the customer’s side.

Why would I give my product for free you ask?

Giveaways are all about engagement. They build engagement and furor like no marketing campaign out there. People like, share and provide their email addresses and what not, with giveaways.

It also tells you, if people value your product.

Breakdown of a Good Giveaway Campaign

The first successful campaign we cover is from Red White Mobile

Red White Mobile wanted to promote the Oppo R17 mobile phone and get a good engagement going for their campaign.

They decided to give a gift worth $238 absolutely free. What was the gift?

They used something at their disposal to do a giveaway. 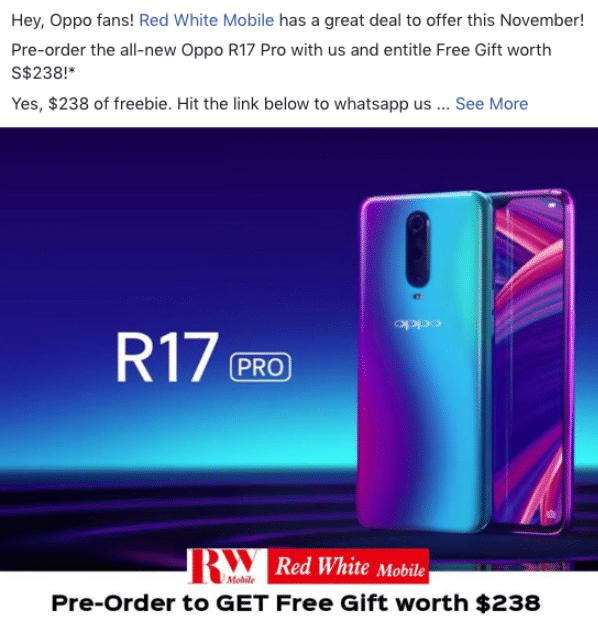 The best thing about this giveaway is the value of the gift. $238 is no joke. People are automatically attracted and their attention is on the giveaway.

The call to action asks people to click on a link and message them on Whatsapp. Most people are curious about the gift and immediately click on the link to chat with the company.

The other call to action drives people to the store. People who live close by realizing they are near and drop by the store to avail the offer. 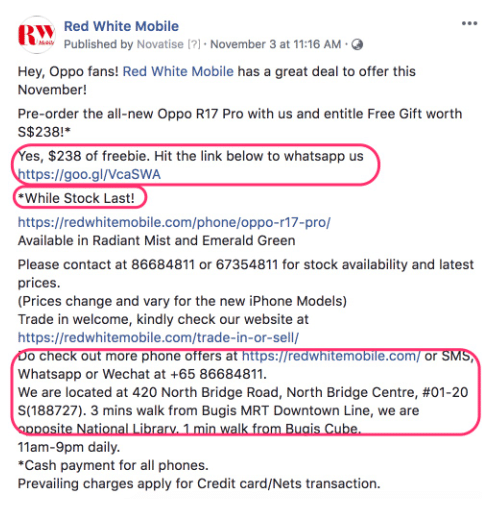 Over 15,000 people saw the campaign and 750 people engaged with the post and lot of it was driven organically because of the shares. 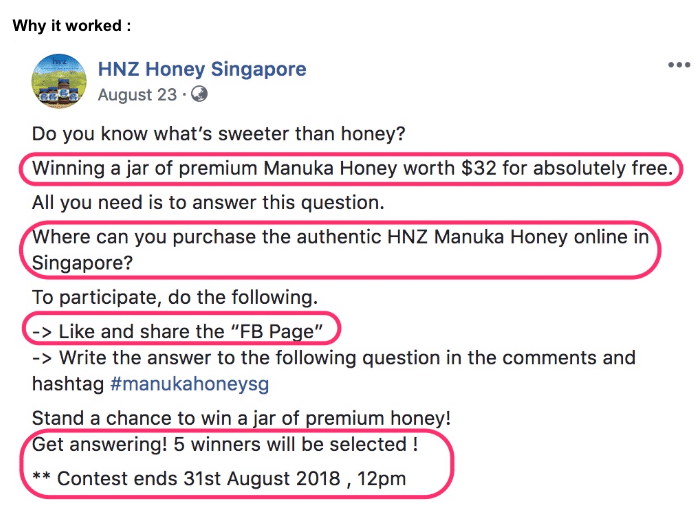 HNZ Manuka is a New Zealand based Manuka honey brand. They are making a foray into the Singapore market and wanted to create a buzz around their premium Manuka honey. The biggest concern was. How would customers know how the honey is without tasting it?

They solve that puzzle by creating a giveaway campaign.

One of the main successes of the campaign was due to the fact that the participant would get the Manuka honey for free. It was a whole jar of honey worth $32.

By giving an end date to the campaign, HNZ Honey built a time constraint to make sure users act fast. They also asked a simple question, the answer which is available on the website.

This campaign resulted in 168 Comments, 169 Shares

Hot Tomato keeps running giveaway campaigns to build engagement and to improve their branding. This campaign’s goal was to run a voucher giveaway while making it fun and interesting for the customers.

They created a post with emojis of a few ingredients and they asked people to guess. People could always look to the menu for hints. 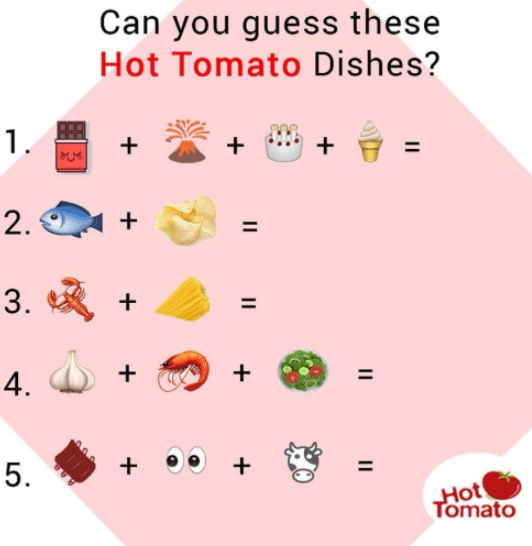 Humans like to be challenged especially when it comes to simple puzzles. For 5 minutes of their time, they get a $20 voucher, which is a good amount for a meal.

The results of the campaign were campaign was amazing. They received over 221 comments, and 136 shares which led to an organic distribution of the campaign, 5000 people reached. They registered 592 reactions.

Home n Office was just building their Facebook page and did not have enough likes on their page for future engagement. They decided to create an interactive gif that asked people to pause at the right time to catch the most number of “Mice”. They also gave away a Logitech Mouse worth $30 in return for a like on the page. 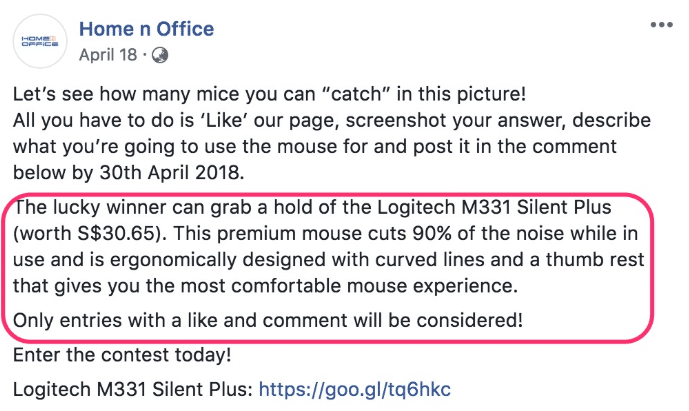 People like games and it’s a simple game that they have to play and they also win a mouse worth $30. 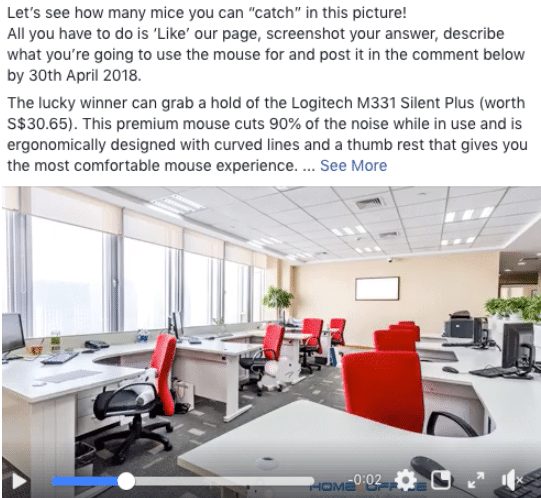 HNZ Manuka Honey wanted to generate leads and at the same time, they wanted people to taste test their honey. They gave away tiny sachets of their honey in return for filling a form.

It worked remarkably well because Manuka honey is a unique product and everybody was keen to taste it without having to buy a jar. With this campaign, they could taste the honey for free. HNZ New Zealand in return got the names, numbers and email addresses of the customers. This was their lead list that they could promote to anytime in the future. It’s a win-win! 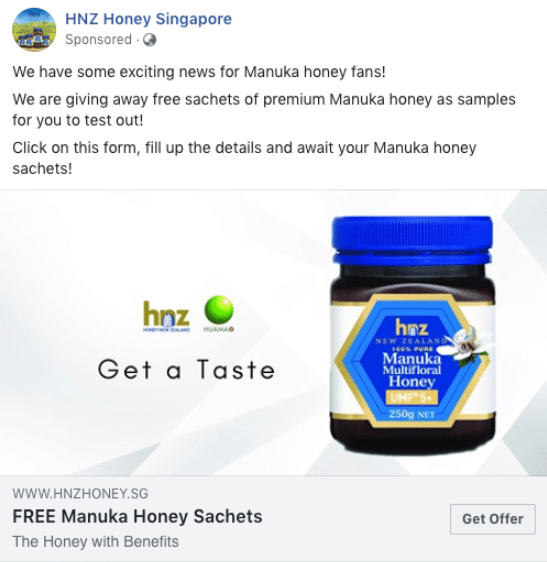 Check out our Facebook Marketing Services Singapore and speak to our team if you need additional help in social media outreach.

We help SMEs in Singapore to create digital solutions to increase sales and productivity. At Novatise, we work in a lean environment as such, no sales person is involved. 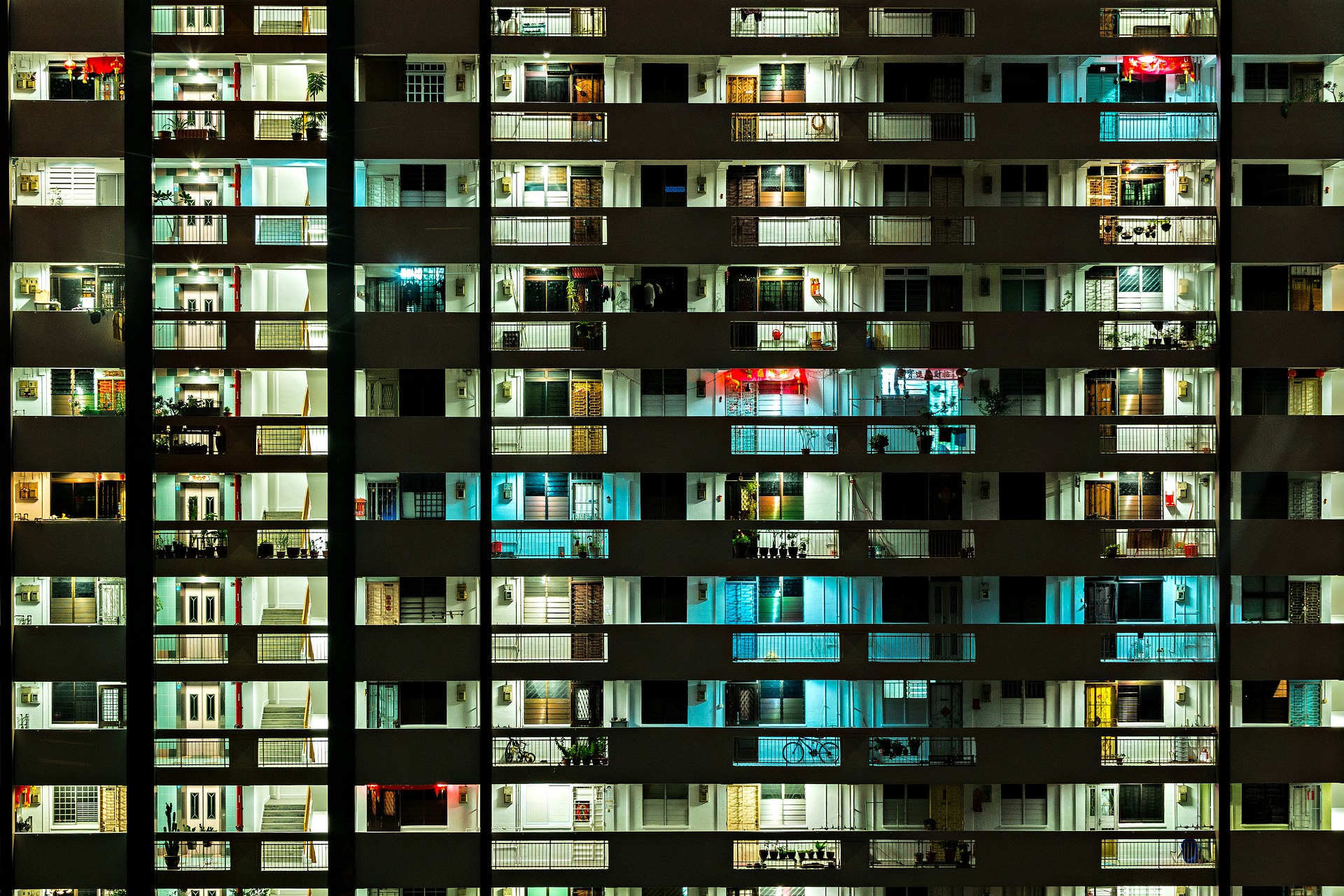 How much does it cost to Advertise on Facebook in Singapore? 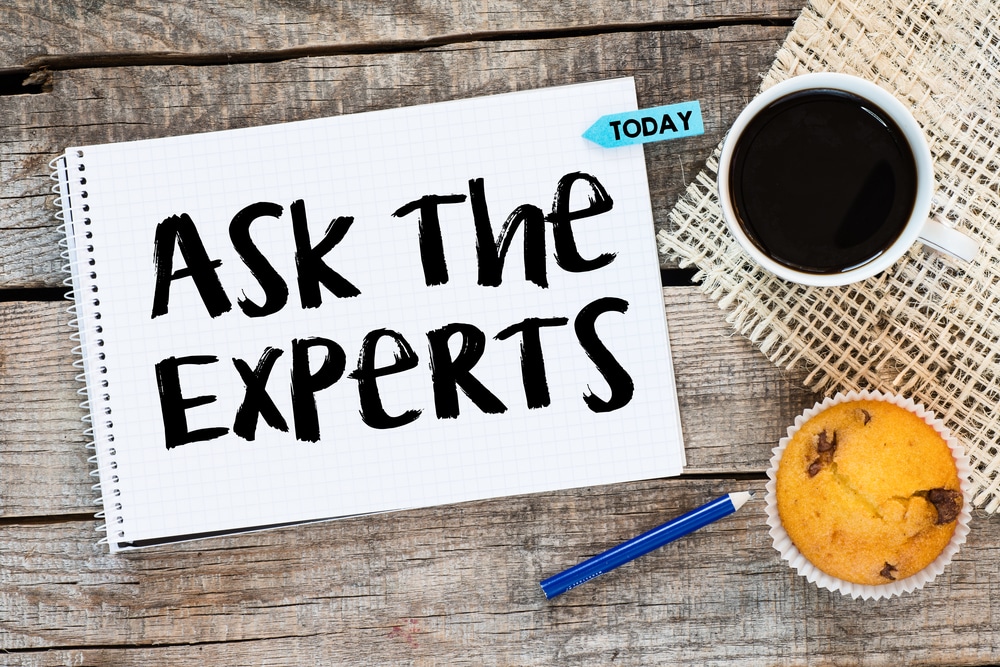 SEO vs Facebook Marketing – Which should Singapore Business go for?